First of all…why is this east-end neighbourhood called the “Pocket”?  The residents created the name  because this little piece of Riverdale is tucked in between the Greenwood TTC yard and the CN train tracks and actually resembles a pocket – closed on three sides. You can only get to it from the west from  Jones Ave, from the north Euston or east on Chatham. It’s a small, quiet and unique “pocket” sitting smack dab in the middle of one of Toronto’s most popular neighbourhoods. 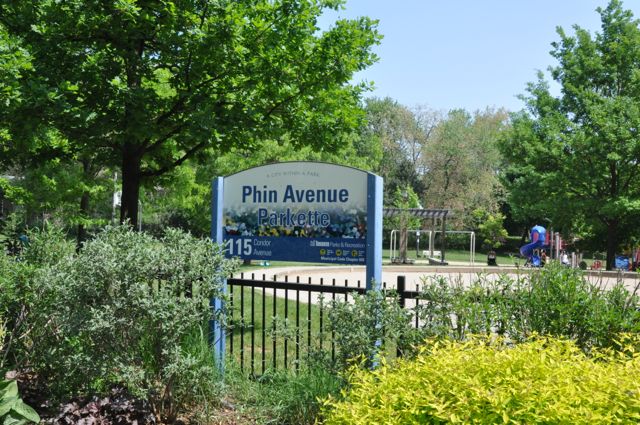 Phin Park is the green hub and heart of the Pocket

The area’s residents love living there. The community’s relatively new personality started to take shape about twenty years ago when younger families and single professionals started buying up the affordable older homes, many of which were built before WWI.  But there are still plenty of older, long term residents living in the “Pocket” because it appears that once you move IN…you’re in no hurry to move OUT.

Ravina Cres., a winding street south of Danforth Ave. off of Jones is one of the main entry points.  Baird and Condor Avenues plus Earl Grey Road are primary  streets but there are also several interesting smaller streets and lanes.  Ben Kerr Lane was named after longtime local resident, busker and perennial mayoral candidate Ben Kerr.

The “Pocket’ is just a few minutes south of the Danforth and residents can walk to their favourite restaurants, coffee shops, pubs and cafes that line one of the city’s most popular Avenues.

Two TTC subway stops are just a short walk away – Pape Station to the west and Donlands to the east.   Area schools include Earl Grey Senior Public and Eastern Commerce Collegiate.  The “Pocket” is literally surrounded by parks all within a short walk from the heart of the neighbourhood. 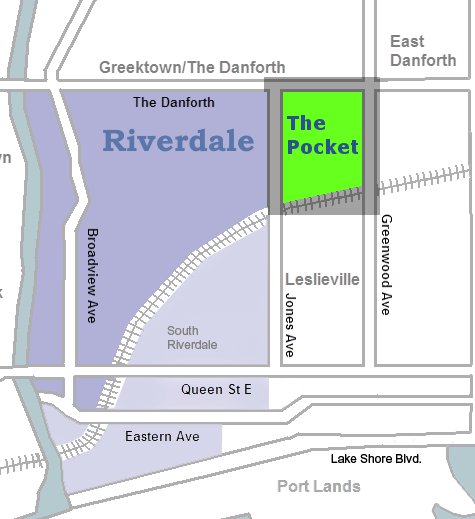 The homes in the Pocket are older and well maintained.  Small yards with well tended gardens and minimal traffic have engendered a real sense of camaraderie among the residents.  Block parties, street clean-up days, community BBQ’s and pot luck get togethers are the order of the day.

The Pocket is also home to the Greenwood Subway Yards, a maintenance shop for subway cars.  Bordering the yards is a greenspace called Oakvale Green.  The greenspace is maintained by the TTC, through two agreements with the community.  In 2006, the residents of Oakvale Avenue (OKRA) signed a “Memorandum of Understanding (MOU) covering the eastern portion of the lands.  In 2014, the Pocket Community Association (PCA) finalized an MOU covering the western portion of the lands.   Click here to see a copy of the PCA’s MOU.